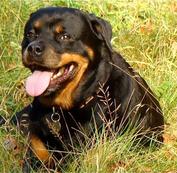 We said goodbye to my darling Wrink on 10 September 2014.

Those who read the blog may know that my rescue rottweiler Wrink had been suffering from a slipped disk since January which was managed with steroids and painkillers in preference to horrible, invasive spinal surgery and a long, arduous recovery, considering her age and other ailments. She had a pretty good summer but lately her mobility worsened considerably and after weighing up the options, such as they were, we all decided that the kindest thing for her was to have her put to sleep. She was 10 years 3 months.

It is with great sadness that I have to tell you that poor Ollie became very ill and we said goodbye to him in April 2014. He would have been 11 in June 2014. 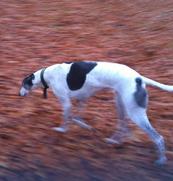 I adopted Wrink in 2007 when she was 3 and a half. She did not cope in the kennels at Wood Green Animal Shelters so I fostered her and couldn't give her back! Ollie was an ex racer who my husband adopted when he was 4. The two dogs met before my husband and I did because, coincidentally, they went to the same dog sitter!

My name is Holly Chase and I started Dog Walking in Cambridge in 2013 so that I could get back to working with dogs.

My professional experience of working with dogs over the last decade includes: working in dog rescue, handling and caring for all types of dogs and assessing them for re-homing, learning about dog body language, calming signals, and behaviour. I have also worked as a dog walker/pet sitter for PetPals in London where I held keys to peoples' homes and collected their dogs for walks. Until very recently, I also had my own two dogs, a rescue rottweiler and ex-racing greyhound. Both have passed away and we now have a young rescue dog Bracken. Being a dog owner myself I know how important it is to find the right care for your pet and I aim to take care of my customers dogs as I would my own.

I'm not a trainer, but if I use any training techniques they are always positive reinforcement based (reward based training - no physical force or dominance theory techniques).

The area I cover is the city of Cambridge, UK.

I am DBS checked and fully insured. 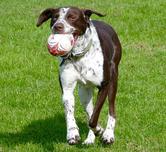 This is our current rescue dog, Bracken. We brought him home on 15 December 2014 when he was thought to be about 18 months old. We had very little history on him but he settled in well, goes out with my dog walking clients and is making progress in his training.